11 May Pregnant Via Frozen Transfer After Job Loss and Miscarriage 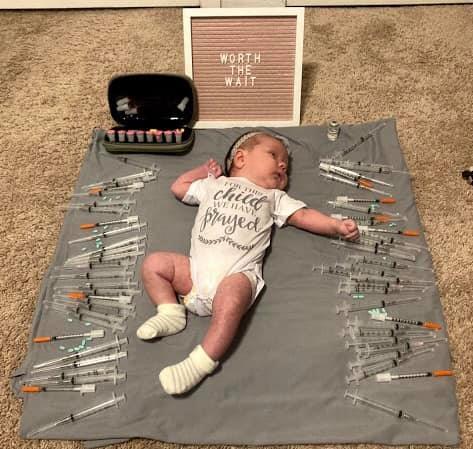 In 2009, I was hospitalized for appendicitis and had my appendix removed. I spent a lot of time in hospitals for the next few months due to excruciating pain. After many diagnoses and a slew of doctors, I found out that the toxins were not drained when my appendix was removed, and it was wreaking havoc on my body.  My reproductive system had been fused together, and there was a very high chance that I would be unable to conceive in the future.

My husband and I married in 2014 and started to discuss children not too long after.  We sought the help of a fertility specialist. This specialist was a 3 hour drive one way and not covered by insurance.  She confirmed my diagnosis. I opted for surgery, hoping it would be a “quick fix”.  After the surgery, we tried for another year with no success.

We decided to pursue IVF when we had saved enough money to do so and we officially became debt free in August of 2018. But, my husband, Josh, lost his job in September. I knew my dreams would be on hold once again. It was at that moment that I heard God tell me to wait and it was during this time I found Moms in the Making. We ended up surviving off my teacher salary for a few months and put all of our leftover money into our baby fund. We had saved enough to pursue IVF in April 2019 and we paid for the process in full and started in June.

Our first transfer was a success. I had received my first positive pregnancy test! A few weeks later, I was told that the pregnancy was no longer viable and my body would soon miscarry. Feeling defeated once again, I continued to cling onto the hope that God would provide for me in his time, not mine. I had a frozen embryo transfer a few months later and became pregnant with our little miracle, Emerie. She was born in June of 2020.

During my wait I relied heavily on encouraging Moms in the Making Facebook groups and devotionals. I also started reading “In Due Time” during our wait for finances. Moms in the Making and In Due Time allowed me to rely on God during this season of waiting. I was lucky to be matched with a great prayer partner during the early stages of my pregnancy when my anxiety was high which I am so grateful for!